The Long-Term Financial Threat to Postsecondary Sustainability in Canada

In the last six months, there has been just one story: COVID-19. In the postsecondary sector, every conversation has been tied to the pandemic in some way: student and instructor safety, the rush to make remote learning work, and the immediate financial crunch facing institutions.

But what none of these conversations have focused on so far is what Canada’s postsecondary sector should look like coming out of the pandemic. While university administrators and political leaders are right to focus on the crisis at hand, it has laid bare significant, long-term gaps in the system that threaten its continued financial sustainability.

Our team at Keypath started to dig in and learned that postsecondary education in the 2020s has little in common with the early days of this century. The early 2000s were a time of budget surpluses when governments could and did spend heavily on enrolment, hoping to tap into the then-new knowledge economy as manufacturing began to flag, and a new generation flocked to campuses across the country. People believed postsecondary education was the key to the new economy and a silver bullet to unlocking a life of financial comfort.

As a result, postsecondary funding became so closely tied to higher enrolment levels that between the academic years of 2001-02 and 2009-10, universities saw a funding increase of over 50% driven by these spikes in enrolment. This also helped Canada establish its position as one of the most educated countries in the Organization for Economic Co-operation and Development (OECD) over the last decade. This progress served as a proof point that sitting governments were playing an active role in setting up the next generation and the wider economy for success. And it became the investment model that leaders in the postsecondary sector have wanted ever since.

Eventually, though, the preoccupation with high enrolment ran headfirst into an even stronger force: the Great Recession. Funding levelled off at the beginning of the 2010s as governments across the country came to grips with bailout-driven budget deficits. By the 2016-17 academic year, provincial funding for postsecondary across the country had decreased by 0.3%. Some experts even estimate that when higher enrolment and tuition costs are taken into account, the decline in provincial funding on a per-student basis was even larger – closer to 15%.

A serious side effect of the austerity of this recession soon emerged: new graduates, weighed down by postsecondary debt, struggling to find suitable work in a low-growth, post-recession economy. Provincial governments stepped in to help students avoid this fate by helping them complete school and stay afloat after graduation. In Alberta, the government froze tuition and fees for four years starting in 2014. In Ontario, these efforts took the form of the Student Repayment Assistance Plan, the 30% Off tuition program, the Free Tuition program, and finally, under the current government, a 10% cut to tuition.

This change in focus has had a direct impact on institutions. By not investing in new operating funding at institutions, the 10% tuition cut cost approximately $360 million for universities and $80 million for colleges. One of the biggest takeaways for political leaders in the post-recession period of the 2010s was that it isn’t enough to simply graduate more students – they need to also be prepared to join the workforce. Governments in Alberta and Ontario have shared plans to move to performance-based funding models where investments are awarded based on requirements largely tied to graduate success in the job market.

In Ontario, the government’s goal is to increase performance-based funding from 2% to 60% by 2024-25. While Ontario’s plan has been put on hold due to the pandemic, Alberta is still moving ahead. And the sector should expect more governments to follow suit as the pandemic continues to batter provincial coffers.

But even if postsecondary institutions are able to satisfy performance-based government funding plans, the sector is still facing another challenge that will prevent a return to the level of funding they enjoyed in the early 2000s: changing demographics. The boom in enrolment in the early 2000s was largely caused by the so-called ‘echo boom’ (children of baby boomers) arriving on campuses across the country. With these students now graduated, based on current demographic predictions, institutions will not see a postsecondary cohort of a similar size until at least 2033. 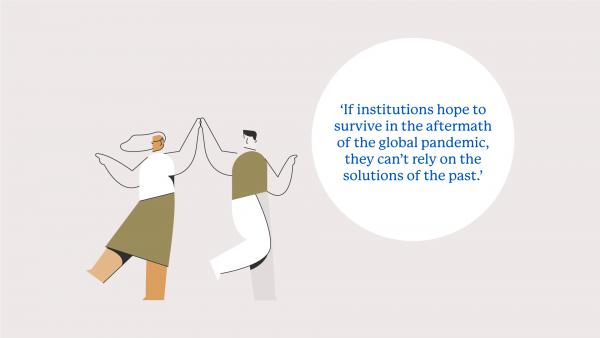 If institutions hope to survive in the aftermath of the global pandemic, they can’t rely on the solutions of the past. Post-pandemic cash-strapped provincial governments won’t have the resources or the political will to return to the modest postsecondary funding levels of the early 2000s. Runaway domestic enrolment is no longer possible because of changing demographics and changing government policy interests. International enrolment will almost certainly see a dramatic drop as the pandemic drags on and the recovery tightens household budgets around the world.

If we’ve learned anything from 2020, it’s that very little about the world remains predictable. Which is all the more reason why postsecondary institutions, if they are to survive, must find new ways to create revenue that can withstand recessions, pandemics, evolving demographics, and ever-changing political winds.

Get in touch with us if you're interested in learning more.

This article originally appeared on LinkedIn